The last few days were very interesting, lots of alcohol, lots of money pulled out of jackets, purses and trousers AND lots of drunk friends and people. On Thursday the the group of us living in Ladlanes and we, from Herbertons met in Temple Bar. I thought Temple Bar was one special bar but as soon as we arrived at our destination I knew it was a whole area which is called by that name. We walked through that district while waiting for the Ladlanes which were a bit late and walked past the Wall of fame. 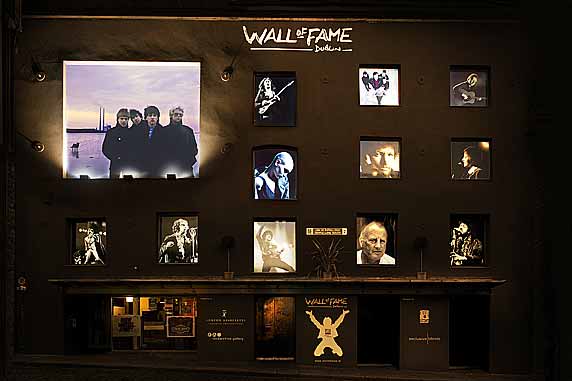 On the Wall Of Fame some of the most famous irish artists originating from Dublin, e.g. Sinéad O’Connor and U2 are immortalized. Finally we met the others and entered Oliver St. John Gogarty Bar. We ordered some drinks, chatted and after a while a life artist started to play guitar and sing. Some songs were familiar, others weren’t but the guy was really really good. The atmosphere in the bar was really warm and talkative. It was so loud that you had to get really close to someone you wanted to talk with. (which is good when talking to girls ;))

On Friday we planned to check out the nightlife of Dublin, means the nightclubs. The Ladlanes came over to our apartment where we started warm up drinking. When we left some of us were already drunk and it probably was fun to watch from outside. We googled were we had to go to but we missed the last bus so we had to walk to our destination. Chris and I roughly knew were the club ‚POD‘ had to be because it is near our work place. After walking for half an hour most of us were tired and impatient for finding the club. So we decided to go into a random club. When we entered we saw the sign reading ‚POD‘. I guess we accidentally found what we were looking for… we are SO GOOD! 😉 We entered and were baffled. There was almost nothing going on on the dance floor(s) although it was already past 12:00pm. So the first thing we did was to buy more alcohol, 3 Coronas for 10€… and again… and…

At around 3:00am the club closed and we went home. We headed home while the Ladlanes walked off in the other direction to get home too. On our way home Alex walked across the street to talk to a group of four strangers which fortunately weren’t hostile. But they gave us great advice by telling us to not talk to strangers on the streets, especially not so at night. They said our district is BAD and very dangerous and we should be careful outside and rather run than getting in danger.

We kept walking and almost home I slipped and while slipping already, I slipped again, so I fell face down on the pavement. I didn’t hurt myself (fortunately) but the way I fell was so funny that Chris and Flo started laughing really really hard. I joined in and we got home amused. At home I went into bed right away and instantly fell asleep.

Today we got up at around 14:00pm and did absolutely nothing at all until we dressed up at around 19:00pm to visit some of the Ladlanes and check out their apartment. Afterwards we wanted to go into a nearby pub but we didn’t feel like it and our last Luas‘ departing time was 0:30am. So we decided to get that Luas and drive home ‚early‘ today. *smirks mischievously*