I didn’t feel like doing a cohesive article today, instead I wanted to give bits of information on random thoughts/impressions I had during this internship.

The umbrella issue
You already know about my umbrella; That lousy thing that couldn’t withhold the second real shower in Belfast. Do you also remember the challenge of finding my second umbrella? The one from the cancer research shop? An update on that: It’s already in a state of decay. I give it three more showers before it will ultimately break down. 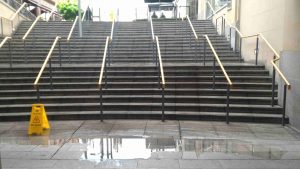 Dress code
Fortunately, I don’t have anything like that at work. The only limit they set me was to not wear a pyjama. I don’t need to dress to impress. But walking through the streets of the centre I see a lot of people, who apparently do need to impress. I see many guys wearing suits, or at least formal shirts. The women are often seen wearing dresses – which is quite impressive, considering the temperatures here.

It’s hot
As said by one of my colleagues in the company, while it was 24 degrees outside. Sean, living in Northern Ireland his whole life, told me the maximal temperature measured in Ireland in the last years was 33 degrees. Josh, another co-worker, said there have been two good summers during the 16 years he’s been here. These are the statistics. I, knowing there were 31 degrees in Berlin one week ago, was not impressed by these numbers. But to be fair, the weather this week was quite pleasant. Pleasant – in a late spring kind of way. 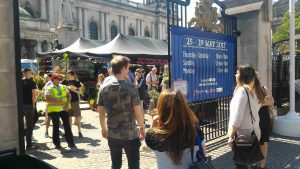 Speaking English
I am not good at talking in general – I prefer expressing myself through writing. So, talking in English was a special hurdle for me. And my verbal skills were very sloppy on the first few days in Belfast. It’s a process of learning: over the course of a week of work my verbal English skills improve – but that’s just the thing. Once I spend my weekend with my German colleagues, all those dialogues I had in English go to waste. German becomes the dominant language again. And at the beginning of a week I start anew to cope with English.

Work
It is interesting how one email can change the whole work flow. It was an email by the boss of the company and he had questions and plans about the office move next week. The only problem: Sean, my supervisor, is on vacation this week. He is the one responsible for the move. But somebody had to answer this mail and I wasn’t mentioned in the CC without a reason. I talked about the office move with Josh (mentioned above) and luckily even Drew dropped by the office. Together we discussed the move of the network equipment. I answered the mail as well as I could and also had to reach out to the Clarity employees to enquire the status of the internal cabling in the new office. Additionally we got the message that broadband couldn’t be provided before June 6th. Is the office move going to be postponed?