There is something I forgot to mention in the prior articles. It somehow never made the cut. Never fit in. It’s been haunting me for the last few weeks and it’s still hard to ignore. It’s this noise. It’s located in the „server room“ of the new office. I obviously spent a lot of time inside this room. I was told that it appeared because of a malfunction of the alarm system. It has not stopped since. It’s been 3 weeks.

Let’s pick up where I left off. All the necessary utilities were present. We were prepared for the worst to come and… Everything worked right away. What a bummer. We plugged Corenet in – the server which is distributing DNS and DHCP services for our network. We restarted the router and everything was working. The servers with data on them were also immediately reachable. There was one tiny setback: One of the services couldn’t be reached from outside (thus being a problem with the NAT Port Redirection), we set the wrong port. It was easily solved. We wrapped up and helped the others to finish filling the new office. And the office slowly started to look like a real bureau. I took pictures of the office – three weeks ago, one week ago and yesterday. Admire its evolution:

There was still a lot to do, boxes to unpack, cupboards to fill – TV’s to set up. At the end of the day we ordered pizza and bought some drinks. It was 9 PM when I left the office that day. It was a long, exciting day and I am glad I could be of help. Additionally I had a lot of great chats with a lot of the co-workers. But that’s not it. I can now proudly declare: I know the name of everyone working in this office (better late than never)!

Yesterday I finished patching the cables, the only thing not in place yet, are the phones. They should arrive later today or we will have them on Monday morning. I am back at researching the cloud migration process. One of my test to migrate my own VM to AWS was actually successful. But Josh told me yesterday that they might want to utilize Chef to do that job. So that is what I’m eyeing for now. 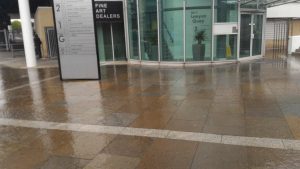 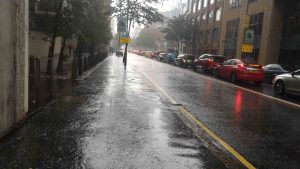 My word contingent is not achieved yet, resulting in my decision to talk about the weather again: It’s bad. It’s raining so much and the weather reports aren’t reliable either. When I left the office yesterday it said light rain. What I experienced was a rain-calypse. My umbrella (currently the second one bought in Belfast) was shielding me in vain. As Dominik might put it: „… UNBELIEVABLE!!!“