We have done an analysis of our log files. The following statistics show how often complete books were downloaded in the months of August and September. October will follow later. Crawlers were excluded. 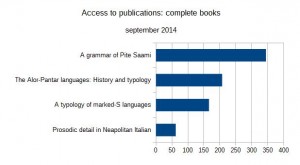 Joshua Wilbur’s “A grammar of Pite Saami” was downloaded 344 times in the month of September alone. Given that normal print grammars usually sell less than 200 physical copies over their lifetime, this already shows the value of publishing your works as Open Access. “A grammar of Pite Saami” was featured on unglue.it, and Joshua also had some coverage from the Guardian, which surely contributed to the figures. An analysis of the sources from where visitors came is pending.

Corinna Handschuh’s “A typology of marked-S languages” is already around since March, and downloads for August and September are both at around 170 per month. We will monitor this over the months to come to see how downloads correlate with the time since publication. The hypothesis would be that there would be an initial peak, which then slowly drops to a plateau.

“Prosodic Detail in Neapolitan Italian” by Francesco Cangemi and “The Alor-Pantar languages” edited by Marian Klamer came out in September only, so that the figures of 62 and 207 downloads are only for a part of the month. The figures for October will give a clearer picture. 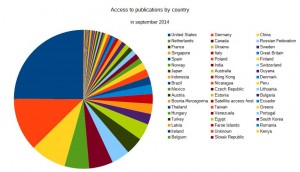 The breakdown by country is also very interesting. Altogether, visitors from 53 countries downloaded books from our site in September. Most downloads come from the US followed by Germany. The fact that the US is top dog and has twice the number of German downloads surprised us, but underscores the international setup of  Language Science Press. China is on place three, followed by the Netherlands, Canada and Russia. Language Science Press has taken care to setup a geographically balanced advisory board from all continents, and this seems to pay out looking at the very diverse audience visting our site.