This blog post deals with two parts in the Language Science Press workflow: open reviewing and proofreading. All Language Science Press publications are reviewed by at least two external reviewers to ensure highest quality. The reviews may be open, that is, they can be published together with the initial manuscript and the final version of the book. An example for such a review can be found on the page for Roland Schäfer’s Einführung in die grammatische Beschreibung des Deutschen (see downloads on this page). After this reviewing there is an optional cycle in which the author modifies their manuscript according to the reviews and then publishes an open review version, which can be further reviewed by the community. After the open review phase the author incorporates suggestions and the near-final version is sent to the community proofreaders. In what follows I comment on my personal experiences with both stages of the workflow.

Grammatical theory was the first book that went into the open review cycle. We used hypothes.is as a tool to annotate the PDF. Due to the size of the book, we had to split the book into two parts. The two annotated PDFs can be inspected here and here.

Dick Hudson, Paul Kay, Antonio Machicao y Priemer, Andrew McIntyre, Sebastian Nordhoff and one anonymous open reviewer commented on the open review version. Some reviewers used hypothesi.s and others downloaded the PDF and commented in the PDF (Hudson, Kay, Machicao y Priemer). These annotated documents can also be found on the download page of the book. The book is a textbook that covers most of the current linguistic theories. I could only write it because I could discuss difficult aspects with my colleagues who work in the respective frameworks. Some of them also commented on sections of the book when it was still a draft. Dick Hudson (an expert on Dependency Grammar) commented on the open review version of the book, which resulted in a significant improvement of the Dependency Grammar chapter. Construction Grammar was discussed with Ivan Sag and Paul Kay and Paul also commented on the Construction Grammar chapter. A last minute reply by Dan Flickinger to a post to the HPSG list helped me to identify an embarrassing mistake in an argument concerning the feature geometry of Sign-based Construction Grammar.

The take home message regarding open review is the following:

After revising the book, I sent it of to Sebastian Nordhoff, our coordinator. He split it into 23 parts and asked those who volunteered to read chapters for their help. He found 31 proofreaders within 3 days so that he could assign two to each chapter. After the respective periods, we got the annotated PDFs and I must say I am really impressed by what I got (example annotated by Gianina Iordăchioaia, example by Antonio Machicao y Priemer). I dare say that no publisher can provide such a service. There is simply nobody on this planet who knows all the internal details of all the theories that are covered in this book. If there were, this person would not work at a publishing house but would have a chair for grammar theory. (And no publisher can afford to have several highly-specialized copy editors to take care of all the subfields we cover at Language Science Press.) But we had all chapters checked by people who worked in the respective frameworks or where interested in them. They found notational problems introduced by me or inconsistent presentations of analyses, which resulted from me incorporating stuff from different authors.

I want to contrast this with my last experience with a profit-oriented publisher. Most of my colleagues have similar stories. I want to share mine here: two years ago I handed in a fully typeset article with beautiful figures, aligned examples and so on. What I got back for final page proofs was something that was the result of somebody copy- and-pasting from my PDF. Figures were redrawn but did not make any sense at all. Angle brackets were changed against normal ones and so on. I had to mark 189 changes in the document I got back. This included hyphenations in the middle of the text (left over from copy and pasting the text from my PDF), screwed up figures, wrong characters (for instance the apostrophe in X-bar), wrong brackets in citations, all text that was italics in my manuscript was in upshape, boxes around characters were missing, arrows were ugly/inappropriate, figures were placed at absurd places, indentation of whole paragraphs was screwed up, you name it. The following figures show some illustrative examples (red corrections mine). 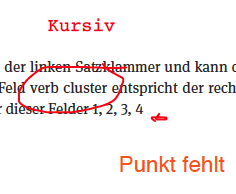 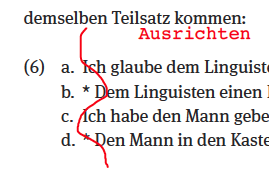 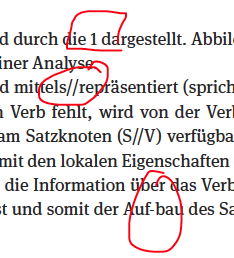 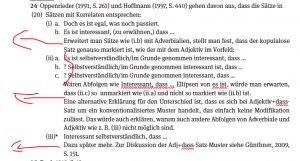 The conclusion is: this major publisher did not do anything as far as copy-editing is concerned. This is done by us, the editors, the authors. But at least they did some of the typesetting. Springer (e.g., Formal Grammar proceedings) just takes camera-ready copies, so there is no service whatsoever.

Discussing Language Science Press with colleagues I sometimes hear remarks like: This is a waste of time. You have researchers work on proofreading. Let professionals do the job. The answer is:

Problems and ways to improve the workflow

There was one problem due to having experts as proofreaders. Some of the comments were very detailed and related to problematic content. 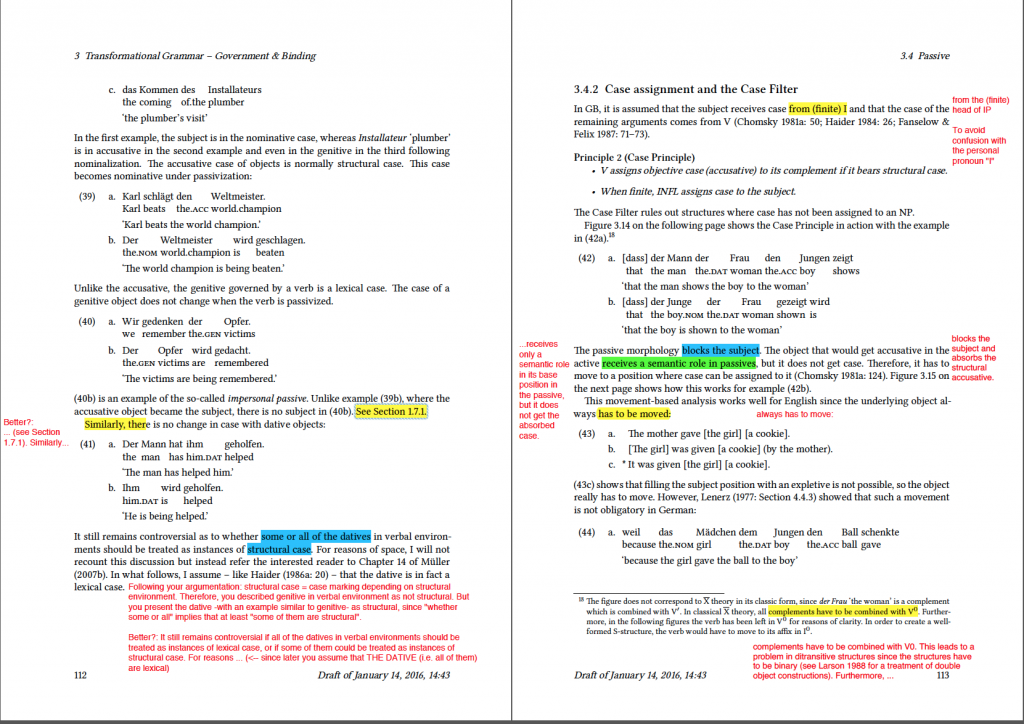 Comments by a community proofreader. Compare with proofs from profit-oriented publisher above.

I was happy about getting these comments, but of course as late as this in the workflow, you do not want to make larger changes in the manuscript.

I think this was due to the fact that many did not want to work as an open reviewer since they would not have to say something on all of these 800+ pages. But this is not the idea of the open review phase. Of course reviewers who have a look at complete books are always welcome, but if a huge crowd has a look at various subparts of a book, we also get a good coverage.

So my suggestion here would be to inform those who volunteered for proofreading about manuscripts that are available for open review. Those who are interested can comment on this version already, so that the authors would get more feedback on content in the earlier stages of the workflow and less feedback in the end.