2015 has been the first complete year for Language Science Press since the beginning of operations in early 2014. There is now enough data to run some analyses.

Up and until 2015-12-31, 139 works have been proposed to
Language Science Press. the following figure gives a breakdown of the
distribution of these works and their states of completion. 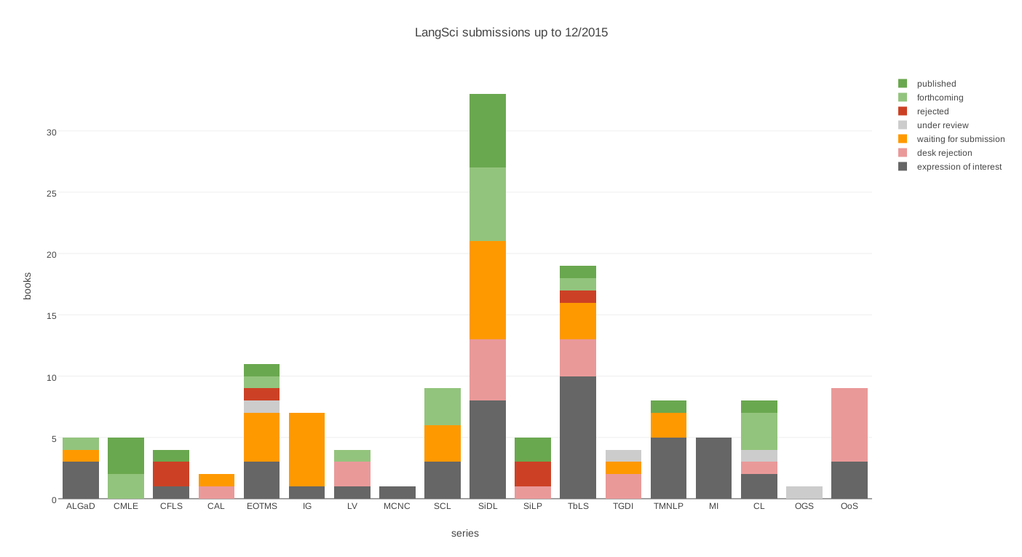 The most active series are Studies in Diversity Linguistics, Textbooks in Language Sciences and Em­pir­i­cal­ly Ori­ent­ed The­o­ret­i­cal Mor­phol­o­gy and Syn­tax. When considering only the works which have actually undergone review, however, Studies in Laboratory Phonology, Conceptual Foundations of Language Science and Computational Models of Language Evolution are also doing well. Network effects apply: as soon as some books are out, the series gets better known and more submissions follow. 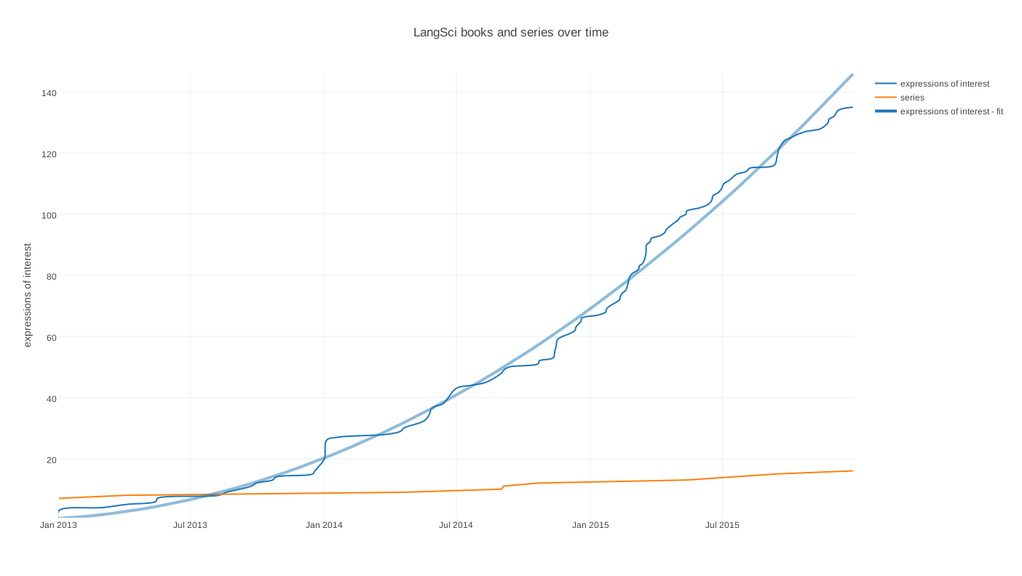 The evolution of expressions of interest (blue) and the number of series (orange) over time.

Until 2015-12-31, LangSci books have been downloaded 40323 times. This excludes downloads by search engine robots. The most popular work is The Alor-Pantar languages, downloaded 7523 times, followed by Einführung in die grammatische Beschreibung des Deutschen with 6576 downloads. 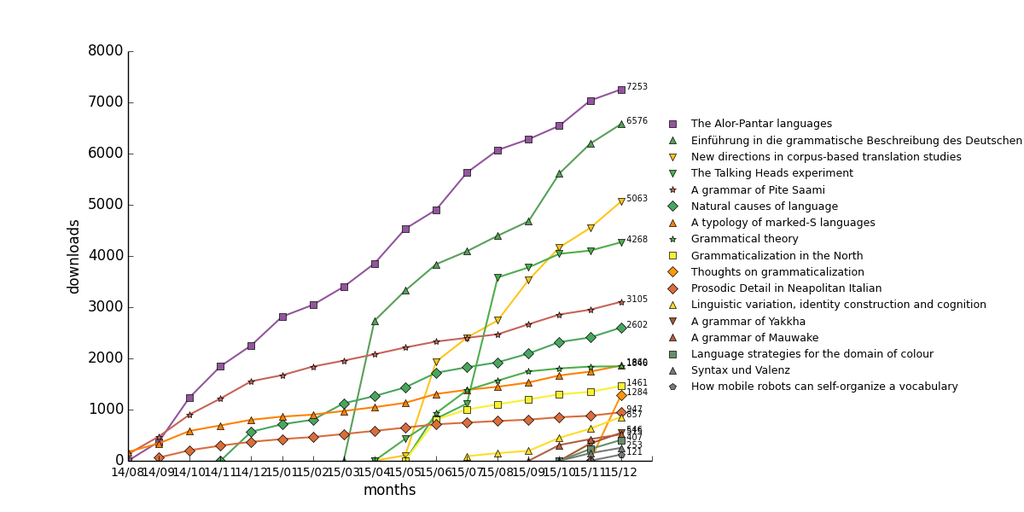 The countries where most readers come  from are Germany, China, the US and Ukraine, showing interest from East and West alike. Indonesia and Iran among the top ten also underscore the relevance of Open Access for non-Western countries. 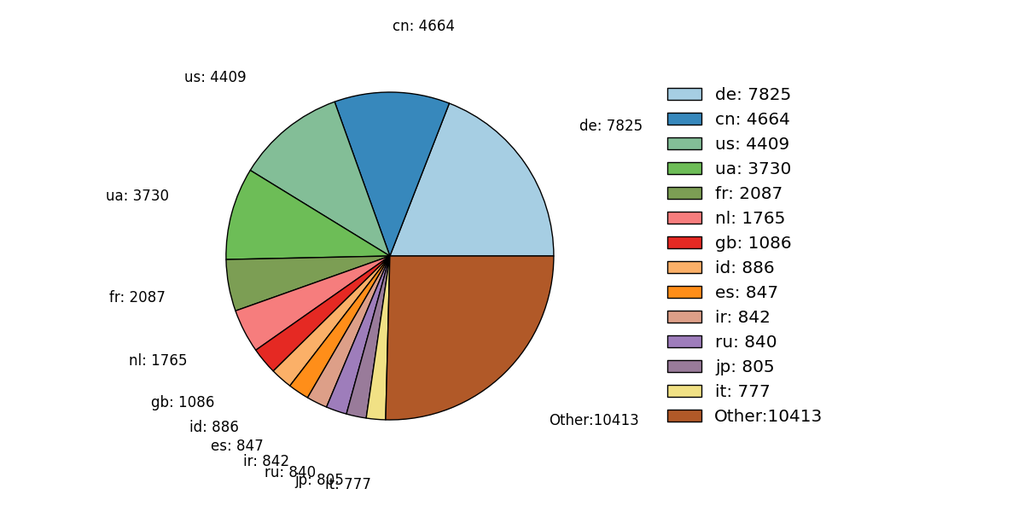 Language Science Press is a community enterprise. We rely on the community for authoring and reviewing, but also for typesetting and proofreading. Among all published books, 43 linguists from all over the world have participated in proofreading. Many more will be found in the upcoming books. There are currently 139 proofreaders registered with  Language Science Press. We give recognition to our proofreaders in our Hall of Fame. 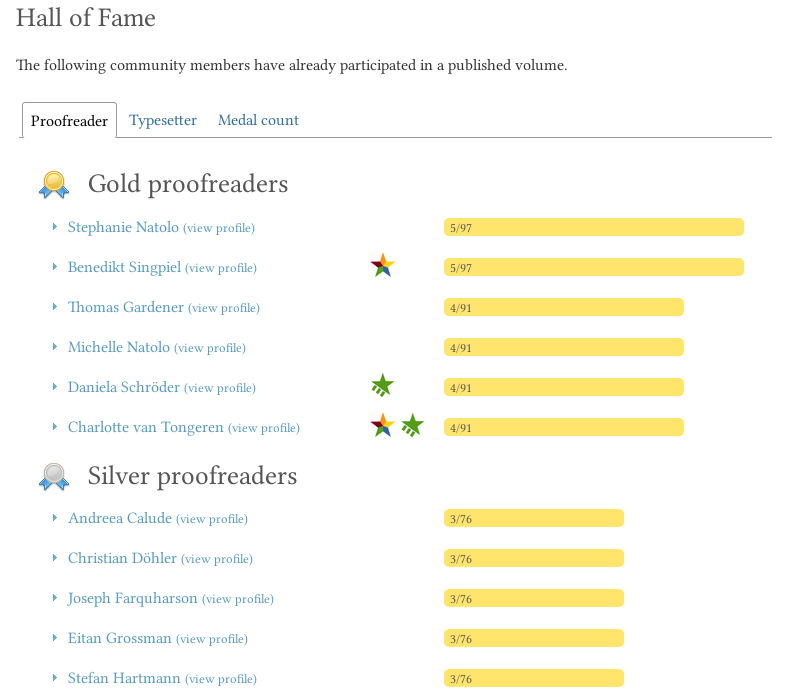 For our 17 series, we are happy to be able to rely on 188 members in editorial boards from 33 different countries on five continents  (see Figure).  These numbers clearly show that Open Access in linguistics is thriving world-wide and that the community is happy to participate in making our research available for everybody to read and appreciate.

Provenance of our series editors (large) and our editorial board members (small). Colors correspond to the series’ colors.