The review process of edited volumes is more complex than the review process of articles or books. The contributions to edited volumes are heterogeneous with regard to the quality of research and writing. The scientific merit of each contribution has to be assessed. Furthermore, the value of the volume should be greater than the sum of its parts. There should be an overarching theme tying the contributions together which will make it worthwhile for the reader to have the whole collection rather than only one article.

In the review process, it is important to distinguish the quality assurance of the individual articles from the assurance of the quality of the overarching volume. In this blogpost, I will detail several options how this can be achieved without imposing unnecessary friction or rounds of review. Some terminological conventions: the quality assurance of individual articles, I will call ”assurance of scientific merit”; the quality assurance of the edited volume as a whole, ”assurance of coherence”. I will furthermore distinguish between the authors of the individual contributions, the volume editor (VE) and the series editor (SE), assuming that the book will appear in a series like Studies in Diversity Linguistics.
The overall coherence of the volume depends on the content of the papers. Even if one or several papers were not of particularly high quality, this would not make the volume incoherent: there would simply be certain aspects of the theme of the volume that would be covered, but in a less than optimal way. This means that assurance of coherence can be done based on the volume proposal plus chapter abstracts. It would be very uncommon for an author to completely change the topic of their contribution between the initial abstract and the final contribution. When the VE submits the proposal+chapter abstracts to the SE, the SE has several ways of influencing the coherence:

After this step is completed, the authors create the initial versions of the chapters, which have to undergo the assurance of scientific merit. This is where things get complicated. The following problems have to be addressed:

It is typical for edited volumes that papers get reviewed by the other contributors, who are often also specialists in the very narrow domain the book is about. Nevertheless, appeal to a broader readership is also important. Therefore, the internal review is often complemented by an external reviewer. There are three ways to assure the scientific merits of the papers in an edited volume. I will call them the ”Delegated system”, the ”Compliance system” and the ”Two Reviews System”.

In the delegated system, the SE entrusts the VE with the assurance of the scientific merit. This is similar to the role of a guest editor for special issues of journals. The SE values the opinion of the VE and accepts their judgment as to which papers are valuable without further ado. 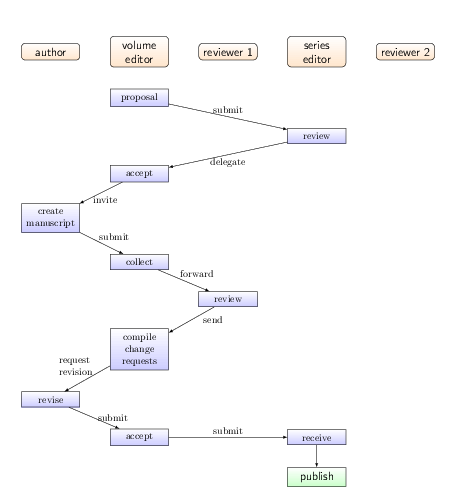 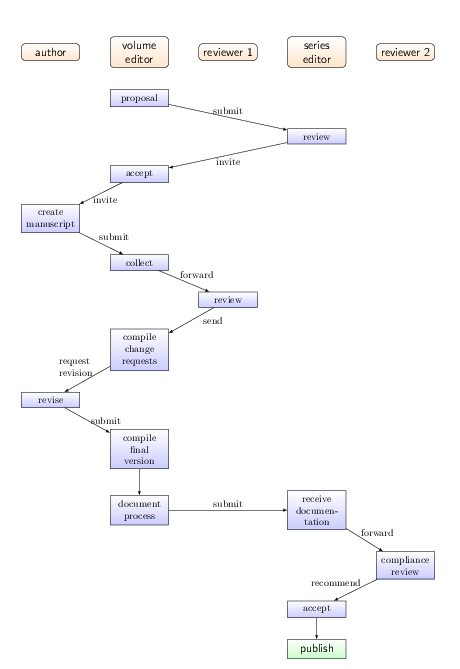 In the Early Two Reviews System, the VE submits all initial submissions they wish to include together with the reviews to the SE. The SE then gets reviews for that material and decides whether to accept the submission. The early two review system is similar to the Compliance System in that the reviewer gets to see the first round of reviews. If this second-level reviewer recommends acceptance, the SE informs the VE that the first-level reviews can be sent to the authors. The book counts as accepted. The incorporation of the changes by the authors is subsequent to this. The final version of the edited volume is sent to the Series editor and counts as accepted. In that sense, the Early Two Review System is similar to the Delegated System because a rejection is no longer possible at that point in time. 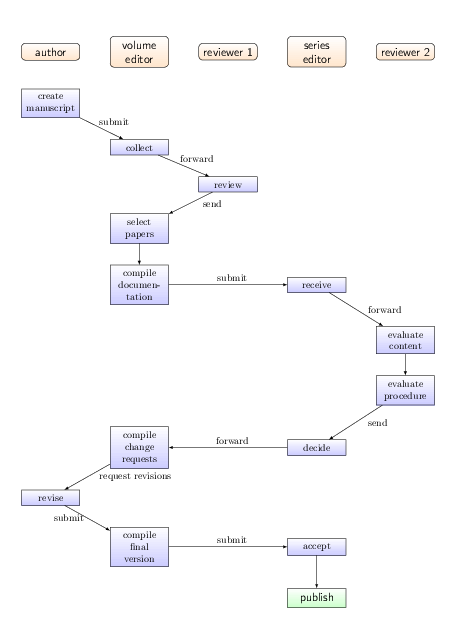 The late two reviews system differs from the Early Two Reviews System in that the version sent to the second tier reviewers is not the initial one, but the one which already incorporates the first-tier reviewers’ comments. This will make it easier for the second-level reviewer to judge the papers, but it can also lead to frustration if the book ends up being turned down and the authors’ work on revising the papers based on the first-tier comments was for nothing. Second level reviewers in the Late Two Reviews System only judge the global scientific merit of the final volume. A judgment of the procedure is then not necessary. 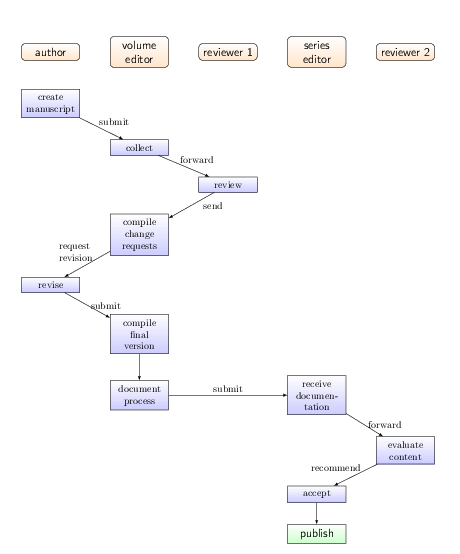 This blogpost has detailed the workflow for different systems of reviewing edited volumes. It is clear that different subdisciplines of linguistics will prefer one or the other. It is hoped that this typology will make it clearer which workflows are preferred in particular disciplines and maybe also give some arguments in favour of one or another of the presented workflows.