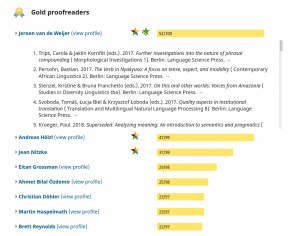 The LangSci Hall of Fame 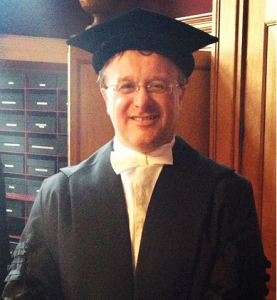 Jeroen, you started community proofreading in June 2017 and have participated in 52 published books up to now. You are #1 in the LangSci Hall of Fame.

What were your motivations to sign up as a community proofreader? How did you hear about this possibility?

I think I saw a book in the series and browsed the website–partly out of linguistic interest, and partly as a supporter of open access. I have been editing books and journals for many years, so I like this kind of activity and have gotten a bit of an eye for things that may go wrong in linguistic texts. It’s very nice if you can, once in a while, prevent an author from making a mistake where they forgot a not (or a crucial comma, haha) – it’s nice to make things better, even if it’s only a little.

How do you like the process so far? What have your experiences been?

I like the process. “Crowd-reading” like this is a good idea. Sometimes I read comments by other proofreaders, and note that they do things differently than me. Apparently that’s not a problem, and further streamlining is probably neither necessary nor really warranted (maybe references could still be automatically improved, or American vs British vs Australian English spelling). It’s up to the author, of course, to see what they do with the corrections and comments, and it’s nice to think that a text could still be further improved at some point in the future. Perhaps we can have an evaluation some time.

Could you tell us how you go about a new chapter when you receive it?

I dive right in. I always read the acknowledgements (who doesn’t?), but then I turn to the assigned chapter, start at page 1 and don’t usually stop until I’m at the end. Because of the time difference I often read early in the morning, when I can work for a few hours at a stretch.

You seem to be rather eclectic in your choice of books. Is this on purpose?

Yes. Although I had excellent schooling in many linguistic topics before and during my PhD, it’s really important to have a broad knowledge of a much wider range of topics (especially here in China, where there are not so many linguists and you’re expected to teach and know everything). So I read widely (also outside linguistics, in fact).

What has been your favourite book up to now? Anything particularly rewarding you have discovered outside of your main domain of expertise?

That is an excellent question. Actually, yes: there was a semantics textbook (Analyzing meaning, by Paul Kroeger, https://langsci-press.org/catalog/book/231), which was so clear and so successfully brought out how interesting linguistic meaning is, it made me want to teach a course on semantics right away. And quite recently, there was the book on Wackernagel (https://langsci-press.org/catalog/book/270), which was also fascinating. It’s very important to read more on the history of linguistics, because sometimes the debates that are playing out now are not essentially different from the ones then. So… I learn a lot.

Are you involved in any other open science projects?

Yes, I am editor of an open-access journal Cogent Arts & Humanities (https://www.cogentoa.com/journal/arts-and-humanities), which is also plenty of work. This journal is only a few years old, but I think it fills a gap and could eventually fill a niche in different fields. Here again the topics are broad, but I like to find suitable reviewers for all papers so that the authors (often from developing countries as far as linguistics is concerned) get some useful feedback.

You are based in China. Could you give us some perspective on Open Access in an East Asian context?

Many linguistics books published in China are dirt cheap. Normal monographs in Chinese, published by Chinese publishers, will cost the equivalent of a few euros. A few years ago I cooperated on a huge linguistics and applied linguistics encyclopedia of 1600 pages in narrow print, published by Peking University Press, which costs less than 40 euros. Actually, all books are very cheap, which is great, because bookstores are very well attended. It’s quite normal for kids to spend hours reading in bookstores, just sitting on the floor. But it also means that books published in the west are extremely expensive by Chinese standards, so alternatives for this are great. I think the idea of open access still needs to catch on, but will be embraced in time – first simply from a cost efficiency point of view, but also because the idea of distributing knowledge and ideas widely is well accepted.
Jeroen van de Weijer is professor of English Linguistics at Shenzhen University in Shenzhen, China, where banana, lychee and longan (“dragoneye”) trees line the campus. His main research interests are phonology, phonetics, morphology and psycholinguistics.