These costs have to be counterbalanced by revenue. Traditionally, publishers recoup their costs via the margin of their book sales. In an open access paradigm with a smaller print run, this is less straightforward. 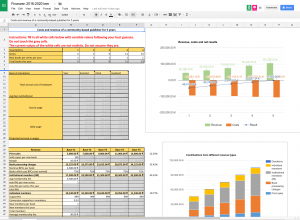 We assume a community-based model, as this is the model espoused by Language Science Press. Scientific publishing differs from novels in that authors and readers hail from the same group and one person typically has roles of both reader and author in the course of their career. Publication of results is really done for the community, not for random unknown readers as is the case with novels. As a consequence, the community should be closely involved in the distribution of scientific findings.

A subcommunity organizes the publication in their field in a series, e.g. Studies in Laboratory Phonology or Translation and Multilingual Natural Language Processing. These series are pretty much autonomous units. A press is formed by several series. The amount of series and their output in books per year give the total output of books for a press. Our model covers the first five years. Typically, there will be a smaller number of series in the first year, which will increase over time.

In the first table (line 4), you can fill in the number of starting series in year 1 and their increase (or decrease) in the following years. Only change the content of the white cells. The content of the grey cells will update automatically, as will the charts (Firefox might have difficulties with the charts). In the next line, you give the average number of books any series produces. Keep in mind that series might need some time to get off the ground and that initial submissions (and publications) will be fewer due to the series needing to gain publicity and prestige.

Based on these parameters, the total output of books is calculated for each year. Books generate some revenue, e.g. via print sales, but they also require some investment, mainly paid staff time to handle the manuscripts. We will first take on the revenues before we discuss the expenditures.

A community press can have the following five types for revenue in our model:

Depending on the goals of a press, it might tap into only one, several, or all of these types of revenue. Tapping none of these revenues, however, will result in serious financial problems for the press.

Next to open access ebooks, a press can sell paper copies. If the copies are not given away at cost price, they generate some profits. Fill in the margin you intend to make for each book in line 32. Higher margins mean higher prices, which will often result in fewer sales, and vice versa. Fill in the amount of books you think you call sell in line 31. Note that all values provided in the white cells are dummy values to initialize the calculation. We have purposefully not put our real numbers there. These two values will be multiplied with the book output for a given year and yield the contribution margin, i.e. how much this type of revenue contributes to the overall financing of your press.

In the so-called “Gold Open Access” model (also called Author-Pays Model), authors pay a fee for the publications costs of a book instead of the press recouping the costs via sales. This fee is called “Book processing charge”, or BPC. As with all types of revenue, one can decide to do without it, but doing without all types of revenue will be difficult.

Typically, some authors will get their fees waived, either because the press really wants that author’s book or because the author is not in a position to pay. This will lead to the percentage of books with BPCs which is lower than 100%. Fill in that percentage in line 35. Analogous to print margins, the output of books per year multiplied by the BPCs paid gives the contribution margin of the revenue type “Book processing charges”

The third type of revenue are institutional members. These are insitutions such as universities, libraries or research centers which recognize the value the press represents for the discipline and pay an annual sum to support it. This type of revenue source is for instance used by arxiv.org or the Open Library of Humanities.

Note that institutional memberships can yield rather large sums, but they also come with significant costs for setting them up, which will be discussed below.

The fourth type of revenue are individual members who join a supporting association (“Friends of XYZ Press”). They pay an annual membership fee. In order to estimate the adherence, we take the number of supporters the press has (line 42) and multiply it with a factor indicating how likely it is that a supporter will become a member (line 43). Furthermore, we asssume that every book will lead to some additional members (at least the author should join…, line 44). The average yearly membership fee is given in line 47. Note that there is a cost in administrating members, and too low membership fees will actually cost more in bureaucracy than they bring in.

The last type of revenue are donations. These are one off sums given by someone who wants to support the press without becoming a regular member. In order to calculate the contribution by this revenue type, we link it to the number of downloads. Every book is downloaded by a certain number of people (line 49). Of these, a certain percentage (line 50) will donate, with an average sum as given in line 51.

Before turning to expenditures, we have to establish three levels of employees, with different qualifications and different salaries: scientists, clerks and assistants. Certain tasks can be accomplished by student assistants, while other require some administrative training (clerks) or even academic training, either in linguistics or administration.

For the purposes of calculations, we set the scientists salary to the German payscale TVÖD E-13, the clerk’s salary to E-9 and the asssitant to the salary paid in Berlin universities. The sums listed comprise all costs for the employer, including contributions to medical care and so on. These are significantly higher than what is found on the pay slips (about 30%). We project an annual increase in wages of 3%. All these numbers are listed in the table in line 9. We suggest you not touch these numbers, but in case salaries are very different in your country, they can be changed.

We assume that a working day has 8 working hours and that the net working days a year without weekends, holidays, vacation and sick leave are 200. These are standard assumptions and should probably not be changed.

Some costs are calculated per book or series. Other costs are more general and cannot be attached to a particular item. An example would be conference trips, which are necessary for promotion and networking, but are pretty much independent of the number of books. For convenience, time is listed as hours for smaller items and as days for larger items.

The time needed for channelling a book is the most obvious item, but there are also various other aspects like coordination and liaising. Furthermore, some revenue types require expenditures. New institutional and individual members have to be added to the lists, or have to be removed when they cancel their membership. Donors might need confirmations for their tax returns;  print on demand platform requires particular formats and metadata entry. These items are all listed in lines 58ff. Note that Language Science Press assumes the book is typeset. If you want your press to provide typesetting as a service, this will have to be added to the costs. Also, the list does not include money to create illustrations or obtain the rights to use third party illustrations.

The costs attached to particular items are listed in the first part of the costs table line 58ff.

The second part of the table covers time spent which cannot be attached to a particular item. If the press grows considerably, these values would also need to be adapted.

The third part of the table covers fixed costs such as rent, insurance, legal costs etc. Investment for initial material is listed in a separate table in line 116 and split according to the applying depreciation in years.

Line 101 then gives you the effective cost of a book of your press. Note that the initial values of the white cells in the table are not necessarily realistic. Please adapt them as you see fit and see how this impacts the cost of your book. Compare this to the figures by commercial publishers given above (EUR 4,000-16,500) or to the USD 15,000-129,000 found in the Ithaka study for university presses.

Putting together the revenue from the 5 different revenue types and the costs (both variable and fixed), we can draw the results of our press. This is done in the table on line 103. This result is also shown in the chart in the top right of the spreadsheet. 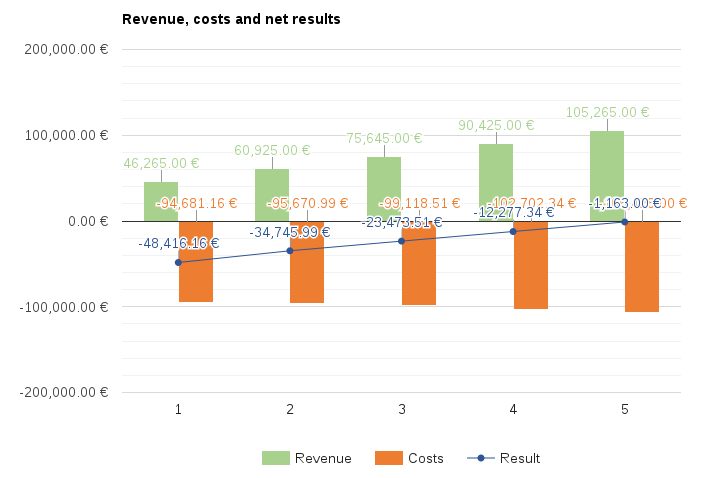 Next to the financial calculations, we can also compute the number of employees (scientists, clerks, assistants) needed. The hours needed per month are given in the upper half of the table. This translates into the full time equivalents (FTE, VzÄ in German) in the lower half.

If you have not opened the link to the spreadsheet yet, we repeat it here for convenience.

Please feel free to play around and see how you can make your press become a sustainable outlet. Comments and suggestions about which are the correct estimates are welcome. Thanks go to Debora Siller for setting up the spreadsheet and doing all the groundwork.