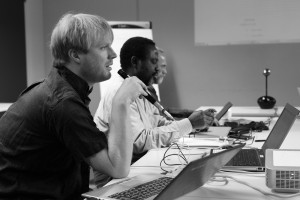 Microphone in hand and outer space camera at the far end: we are ready for the video conference!

The second series editors’ meeting took places in Berlin on Friday November 7.
After the last meeting in March the project has made good progress, and there are a number of decisions to be made. Unfortunately, due to various reasons, not all series could attend. Furthermore, a strike on the German railway network meant that Studies in Laboratory Phonology could also not be present. We made a virtue of necessity and tried a video conference in order to allow people who could not make it to attend nevertheless. We have now gained some experience with the setup now, and so future meetings will include this possibility right from the start, making general participation easier.

Since the last meeting, 5 new series were set up with Language Science Press. These are:

All new series were presented. The relation between the two preexisting African series Monographes on Comparative Niger-Congo and African Language Grammars and Dictionaries was a point of discussion. It was concluded that all series have different foci and also attract researchers from different geographical areas, so that we see them as complementary rather than competing.
There are now altogether 14 series, about 45 book proposals and 14 accepted volumes. Given that we had planned for 9 series in 2016 only, we are already way ahead of our projections!

Presentation of the team

Since the last meeting, 4 new employees were hired, who presented their area of work.

Svantje Lilienthal (sys admin and community manager) presented our new workflow, the user guidelines and future plans for screencasts. There will be guidelines for the creation of manuscripts, which will be complemented by special guidelines for the use of the OMP software. The former cater to authors mainly, while the latter have the series editors in mind, who interact with the OMP system on a more regular basis.

Mathias Schenner (programmer) showed the projected document conversion toolchain, which includes XML and epub. An issue which arose during the discussion was the question whether page numbers are really an important feature of a scientific work, or whether they should rather be replaced by paragraph numbers, which would stay stable regardless of the device the work is viewed on.

Debora Siller (economist) introduced the audience to the strategic planning of Language Science Press, the mission, goals, and implications for possible sources of revenue. One option is to rely on a sequence of grants, but this is a rather risky road. Another possibility would be to generate revenue in order to be able to sustain the enterprise based on own results. At the current point in time, the main tasks from a strategic point of view are the identification of services to be provided, of costs attached to those services, of possible sources of revenue and of suitable legal structures which allow for those revenues to be collected.

Carola Fanselow (programmer) introduced the OMP software and emphasized that it is an Open Source community-driven software. At present it is still rather buggy, but all improvements we make to it will flow back to the community and our efforts will help others as well. The fact that it is free software also allows us to adapt it to our needs. Carola called for the submission of feature requests and bug reports as soon as possible, since we have the resource now to address those needs, but these resources will not be available forever. It was agreed that all series editors should try a dummy submission of a token document to OMP and see in how far the system works for them. If they run into problems, they should get in contact with Carola right away, who will then try and adapt the system to the editors’ needs.

Role of the series editors

One thing which has to be communicated more clearly is that editors have two important tasks with Language Science Press which go beyond acquisition and quality assurance of manuscripts: the editors must be able to oversee the LaTeX conversion process and they must take care of the promotion of the book. 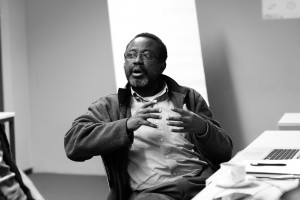 Akinbiyi Akinlabi, one of the editors of Contemporary African Linguistics

As far as PR is concerned, Language Science Press will use their Twitter account and access to LinguistList to promote new books. Series Editors are in charge of making the book known on the relevant mailing lists of their particular subfield of linguistics. Akinbiyi Akinlabi offered to take care of a Facebook account, which will be used as another channel for public relations. After the publication of a book, series editors should also approach third party researchers for reviews of the new book in traditional journals or on blogs.

As for layout, two changes might be made in the future: the current measurements of 17x24cm are suboptimal for international retailing, so we might switch to 17x22cm, which is a more common format. Furthermore, the font which is presently used is a bit too large, so that we might reduce font size for future books.

Since the number of series has grown by more than half over the last 6 months, the question arose whether we should cap the number of series. Consensus was that as long as new series are high quality, there is no need for a cap. If other subdisciplines want to set up series, this rather shows that Language Science Press is on the right track. If ever the workload should become to high, one could rather declare a moratorium for new series until the workload has come back to normal again.

The next series editors’ meeting will be held  in March in Leipzig, adjacent to the DGFS