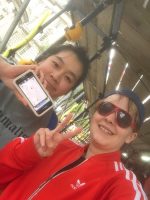 The first weekend in our new accommodation started early. At 9 a.m. Jenny and I made German pancakes and porridge with frost fruits. It was the first time I’ve ever made porridge *haha*. END_OF_DOCUMENT_TOKEN_TO_BE_REPLACED

I do like Belfast really much. That is really much because of the nice museums, the pubs but most the friendly and open-minded people.
Finally my girlfriend is visiting me and I want to show her these characteristics of Belfast.

END_OF_DOCUMENT_TOKEN_TO_BE_REPLACED 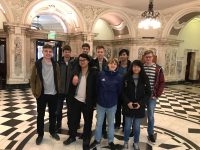 Even history has to be. In the early afternoon we decided to go to the city center today. At 3 pm we met in front of the City Hall. The City Hall of Belfast was built at the beginning of the 20th century and meanwhile serves as a museum. Since the entrance was free, we decided to go in and spend a little bit of time with the history of the city. In one room there was a throne on which one could sit down to take some pictures. Due to some backgrounds, which I will explain in more detail another time, I was forced to put on the robe and sit on the throne. END_OF_DOCUMENT_TOKEN_TO_BE_REPLACED

Today my day started a little bit earlier than the others. Even Colin (an employee from InternEurope) told me to begin work at 10 a.m.; I remembered that Kelli (She is my supervisor at ‚volunteer now‘.) asked me to start work at 8:30 a.m. Not a problem for me. It supposed to say ‚The early bird catches the worm.‘