Work was relaxed today because a colleague allowed me to leave earlier from work because there was just one colleague left in the office. I informed my supervisor by writing an email and left at 1 p.m. At home, I tried it one more time at the post office nearby our accommodation. I was lucky things didn’t turn out worse. I missed the collector for the parcels, but the staff gave me a discount of 10% for my 7 kg large package. That’s why my box will be sent on next Tuesday because Monday is a Bank holiday. END_OF_DOCUMENT_TOKEN_TO_BE_REPLACED

At work, I continued the task, which needs to be finished. In the afternoon Jenny and I tried to send our parcels to Germany. First we decided to use Hermes, but unfortunately, we didn’t have a label from Hermes because we thought it is a Hermes shop, where the labels will be printed out. However, the shop owner apologised, and we had to left the shop. My parcel was quite heavy however we had to walk home again. END_OF_DOCUMENT_TOKEN_TO_BE_REPLACED

Yes, it’s true and I’m not sure how to deal with it.

Since Wednesday we’re having great weather here in Belfast. It is about 20(!!) degrees with a lot of sun.

END_OF_DOCUMENT_TOKEN_TO_BE_REPLACED 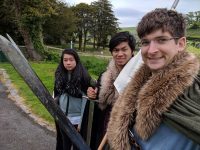 (quote from Game of Thrones)

Our awaited ‚Game of Thrones‘ (GoT) tour took place today. This Sunday started early, but fortune wasn’t with us. First of all, I was exhausted. Second Son and I left the house quite early, but Google Maps or the GPS from my phone had some errors. My ’smartphone‘, which was stupid this time, navigated us to the wrong location. We had to run to the bus, which was exhausting. By the way, Son doesn’t have mobile data so he couldn’t help. Ten mins too late, we arrived the bus. Robert also joined this tour, cause he is such a huge fan of this series. END_OF_DOCUMENT_TOKEN_TO_BE_REPLACED 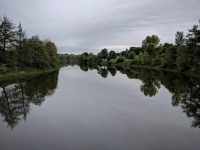 The weather was perfect for a relaxed Sunday.

It was raining with a maximum of 15 °C and it was so cloudy that we needed to turn on the lights during the day. I really don’t like this kind of weather and especially the less daylight because it feels like that the day doesn’t even starts.

END_OF_DOCUMENT_TOKEN_TO_BE_REPLACED 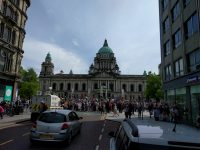 As I mentioned the post before, at Friday we went to the nightclub „limenight“.
Because of the early closure time we arrived at the club quite early.

END_OF_DOCUMENT_TOKEN_TO_BE_REPLACED

After I came back from work, I had to go outside again, because I was cooking today and needed some ingredients. Honestly, I can not cook at all and apart from the fact that I’ve been warming up a few things so far, I have not cooked anything yet. Anyway, today my ‚dear with apprentices’ has forced me to cook samosas. For those who do not know samosas, they are stuffed dumplings, originally from India. END_OF_DOCUMENT_TOKEN_TO_BE_REPLACED

Another sunny day in Belfast. I can’t stand the warm temperature anymore. I even got epistaxis or well-known as the nosebleed. Having breakfast, uploading some blog entries and watching series started my Sunday. END_OF_DOCUMENT_TOKEN_TO_BE_REPLACED

First of all, I recognise that my blog entries are short. I am sorry for it, but nothing special happens during the week, where I can write a lot of content about it. Maybe I got used to the life here, and not many things surprise me anymore. I think because of that.
Usually, after work, I go home and have dinner with the others or relax and enjoy my time here. I hope my entries will be longer on the weekend *snicker* ^^‘. END_OF_DOCUMENT_TOKEN_TO_BE_REPLACED

A long time ago, we planned to have a barbecue because of JDP’s excellent accommodation. The sunny weather suited the best. But first of all Jenny, Phi, Dome and I went to St. George’s Market. We met Tim, Robert and Giuliano there. END_OF_DOCUMENT_TOKEN_TO_BE_REPLACED