We’ve covered what Belfast is most famous for: the Titanic Museum. But what are Northern Ireland’s most notable features? If you say that it is the scenery for Game of Thrones, you might be correct. But since I am not watching Game of Thrones and the tour for it was outrageously expensive I am politely going to ignore this answer. The second best answer is: The Giant’s Causeway. And the 18 pound for the tour were definitely well spent.

The tour was set to start at 9 AM and I was prepared. 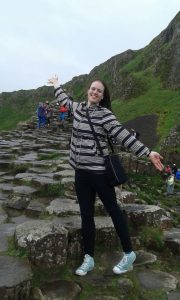 I packed loads of food and a 2 litre bottle of water. I had the misconception that I would not have the chance to get anything to digest elsewhere. Reasonable thinking is not my strongest suit.

We took the tour with „Irish Tour“ and therefore took the direct route to the Giant’s Causeway without making any box stops. We arrived at 11 AM and were one of the first ones to arrive (out of all the tourists). The sight was foggy but still stunning. We walked both ways, the road on top and the other path along the coast. My parents were hallucinating and saying they saw Scotland, but I can assure you they saw nothing that day. The fog was additionally accompanied by light rain showers. I guess it could have hit us worse, but the rain made the adventure at least more authentic. What is a visit in Northern Ireland without a decent amount of rain? 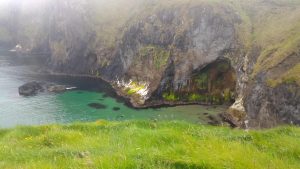 Back on the bus, we were headed to a castle. We saw a lot of castles that day and our bus driver commented on them enthusiastically. But we only spend about 10 minutes on each castle location. These were 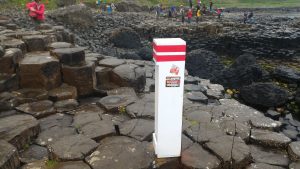 just photo stops and really not that fascinating (to me). A lot more interesting was the Carrick-a-Rede Rope Bridge. It’s a chain bridge spanned over an abyss. It looked scary on the prospects but in reality the bridge was quite short. It took less than a minute to cross it. But the view behind the bridge, on the hill’s tip, was increasing the worth. Something that was surprising to us was the lack of barriers. Neither on this hill, nor near the Giant’s Causeway were any safety borders. It seems so simple to accidentally fall down. Well there was one safety pole… and certain individuals seemed to already have left a mark on it. 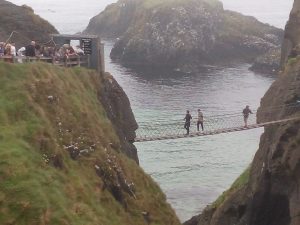 After some more castle stops and a stop at a SPAR shop (didn’t see that coming) we were on our way back to Belfast. And that was good, because I was beginning to feel sick. The bus was driving over the hills with high speed. I felt reminded of my horror flight to Mozambique, but the thought of it actually made it better. I had one bus hour to go and not 7 flight hours. I managed to get back to Belfast unharmed. What I learned that day is to not pack too much stuff, when you go on a pre-planned bus tour. The bus driver will know about your needs.