This blog was supposed to be online yesterday but our internet connection was down a couple of hours. That’s why I am late again.

So today is our relaxed Day, we decided to stay at home in the evening so got some time to write another blog.
This Tuesday we went to a pub/club called “Diceys Garden” a second time. There are two dance floors. One is outside in the “Garden” and another inside. Every Tuesday a band is playing on the floor inside, unfortunately the same band every week and the same songs, too. That’s why I probably will not go there again but I really recommend going there at least one time. 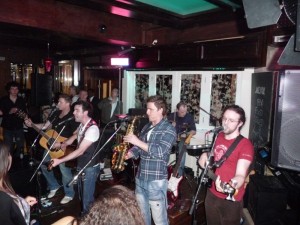 On Wednesday we just played a round of billiard which is really expensive I think. By now we found two billiard saloons here in Dublin. At the cheaper one you pay 1€ for 6 minutes to play. That’s why we just play for half an hour.
On Thursday evening Tim and I have been to “Le Cirk” with some Brazilian people I told you about. I got the picture from the Brazilian BBQ now. Here it is. 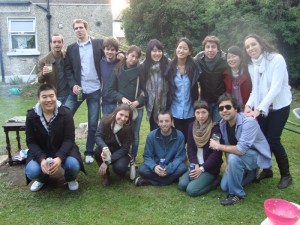 At the pub some Bands were playing Live Music. They seemed to be very young but still they played very good.
Friday evening after being on a party we went to a pub with a bunch of young people we meet on the street. After leaving the pub we had to walk home in the rain. Thats only the second time since we arrived here in Dublin that I got wet from the rain. I hope at Berlin there is nice weather too?
Saturday afternoon we went to a game of football. David and Sebastian were visiting us that day. I won’t talk about the game much because I think Sebastian is the right man for doing that. David however mentioned the tiny entrance to the Stadium in his blog and here is a picture I took. I even had to go sideways to get through. 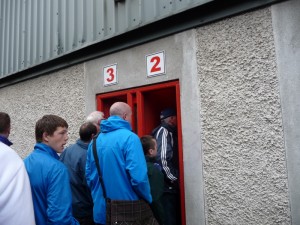 In the evening we went to the pub “Le Cirk” again, but this time it was quite boring. We went there to early the pub was quite empty. So we decided to go to Buskers a pub/club because some musicians where playing live music. Sadly they stopped five minutes after we entered the pub. Still we had a great time. Sometime after midnight David and Sebastian left to get back to Belfast. Afterwards we went to one of the two Porterhouses in Dublin. Actually it is a pub but like most pubs there is a dance floor and most of the people were dancing. At the Porterhouse they sell a beer called “Porterhouse Red” which is brewed by the Porterhouse itself. It’s similar to Guinness and Smithwicks and for my taste somewhere between, it’s a pretty good one. We meet some Spanish/Portuguese/Brazilian friends at the pub and had a good time until the Pub closed sometime around 3am.
There is another picture from the one time Tim and I went to the beach I wanted to share with you. When you see it you wouldn’t believe that I took this picture in Ireland rather than Spain or another Mediterranean country. That’s what it felt like to be on the beach. 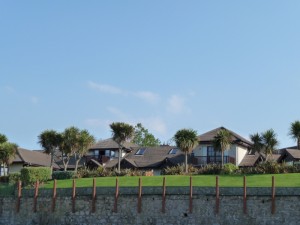 Today we went to the Soul festival picnic at a park near our apartment. There were basically some live bands playing. I took some videos and want to share the Band called “The Barley Mob” with you.

Learning French, teaching German
Well I am hanging around a lot of French, Italian and Spanish people. Most of them at least know some German words. For example I want to ride the autobahn sometime, a Japanese guy told me. Of course you have to teach the German word for cheers… Prost not Bost, which by the way is: Kampai in Japanese. So besides learning some Japanese I improve my French too. By the time I am able to have a simple conversation in French, while at first I had difficulties to think of a lot of French words.

I read through the newspaper some morning last week and stumble across the word creation über-wealthy in the newspaper. It was an article about some rich people. Thought that was quiet funny.

Money
As David mention in his blog Dublin is really expensive.
For a pint of beer you got to pay 4€ if you find a cheap pub. Often you will pay 4.50€ to 5.50€ for one pint. (Diceys 2€ for one pint each Tue – 5€ entrance)
We buy all our food at Tesco, the cheapest supermarket but sill expensive. By now we actually just ate at home to save some money. A Cheeseburger is about 1.70€ at Mc D and BK.
Cloths however are quite cheap especially at Pennys where I got a sweatshirt for about 15€ and some shirts for 11€ each.
A one way ticket for the bus is about 1.15€ to get to the city center. If you want to go further you have to buy up to 2.20€. Gladly I got a monthly ticket from our funding.
In the end it is quite expensive to go out in the evening and as David said, but the best opportunity to speak English is when you go out somewhere. At work I don’t get the chance to speak English very often because everyone is just working including me. Still I used my time and money here very well by now.