On saturday 29-05-2010, David and me traveled to Dublin to met some of our guys down there. You may read his post and I don’t want to bore you with things you already know.

Lets talk about the important things, the football!

We visited the big Dublin derby between Bohemian FC (Nickname: Bohs) and Shamrock Rovers (Nickename: Hoops). It’s a match of big rivals and it was perfect football weather, rain. We were looking for some seats at the Jodi Stand. It’s the name of the grandstand at Dalymount Park. We found some beside the Bohs – supporter. Therefore we could listen to their chants the hole match. This chants were ironic, funny and rough, vulgar (I mean, it’s still football ;)). Here an example:

On the Banks of the Antartica, where the white have never been,
There’s a great big f*ckin Polar bear, half shagged to death by a football team,
We are the perverts of society, we are the worst you’ve ever seen,
We’re a shower of loud mouth b*stards, we are Bohemian Football Team…

We are very well renowned for raping little kids, steeling old age pensioners and little boys toys,
We are the Perverts of society, we are the worst you’ve ever seen,
We’re a shower of loud mouth bast*rds we are Bohemian Football Team…

Unfortunatly the match wasn’t so good. In the first half both teams were very nervous and they don’t create any clear chances. The seconnd half was a bit better. More aggressiv and especially in the last few minutes with many scoring schances. After the finale whistle both teams clashed against each other but no one get hurt. By the way the game ended in a draw (0:0). 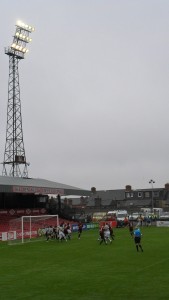 I‘ am still in love with the awesome stadiums in UK and Ireland. It’s only a stone’s throw from your seat and the pitch. The supporters getting really furious if some of their players getting tackled right in front of them. Great atmosphere! It would be perfect if we would have those grounds in Germany, without fences, trenches etc. 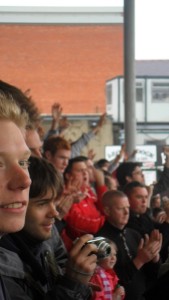 „When I die they won’t remember who I dated, the fights and the car crashes because they’re not important. They will remember the football.“