I was nervous when I entered the DATACTICS bureau on the second floor. 2 months is a rather long time and I wouldn’t want to make a bad first impression. I was 15 minutes early, but waiting outside wasn’t an option. So, I just entered. It’s a relatively small bureau compared to the number of people residing in it. There were about 10 people present when I entered. One of them, Sean, walked right to me and started to introduce me to the other people, showed me the office and my work place and helped me set up my new e-mail account. Setting up the account actually did cost more time than expected. I put down „datatics“ as the domain name and funnily enough nobody noticed it for quite some time. Sean told me about the project and later that day we would have another meeting to discuss the details.

My project is basically to supervise and plan the move of the company to another premises (5 minute walk away from the current premise). I shall document the network infrastructure of the new office, test and verify that everything is working well. The move will be around the end of May/beginning of June. It was scary to see how much they relied on me, I don’t even have any prior networking experience. But I will give it my best. Here is my plan for the next few days. 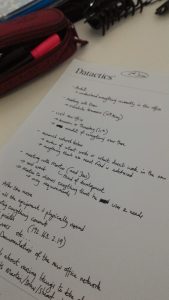 There is something really refreshing about the company: A lot of foreigners work here. I was told many of them completed an internship and decided to stay there afterwards. But they have a different background (contrary to me), most of them studied already. I went to lunch with Sean, James (both Irish) and an Italian girl as well as a Swedish guy. (I should know their names, sorry! I hope I can add them later on; EDIT: It’s Mattias and Rosaria) The Swedish guy actually just started to work at DATACTICS yesterday! Which means I am not the only newbie here. The lunch we had was really good, but a bit too expensive to have it on a daily basis. 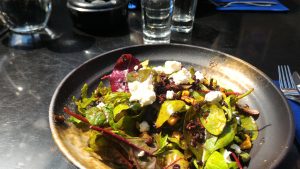 We did have some small talk and I am happy I understood about 80 % of it. But I have to confess: I wasn’t brave enough to ask whether we tip waiters in Ireland (is it appropriate/or are they included in the price?). The others just paid what was written on their receipt and I just went with the flow. If I missed out on giving a tip: I send my deepest condolences to the nice waiter from the bistro, of which I’ve forgotten the name of.